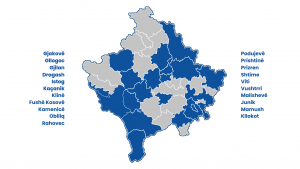 Pristina, 14 November 2021 – Today, 4 weeks after the October 17 elections, the second round of Mayoral Elections is being held.

According to the final list of voters certified by the Central Election Commission, the number of citizens with the right to vote in these 21 municipalities is: 1 million 260 thousand 571 voters.